My Peek A Boo Kitty canvas has had so far nearly as many lives as a real cat!  I thought I would share with you today some of the incarnations of him I have come across so far.

Here he is on the original unstitched canvas: 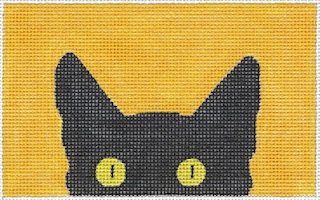 Here is a wonderful framed version stitched by none other than Vicky De Angelis, with a Brenda Hart stitch guide.  Frame and photo from New Creation Picture Framing. 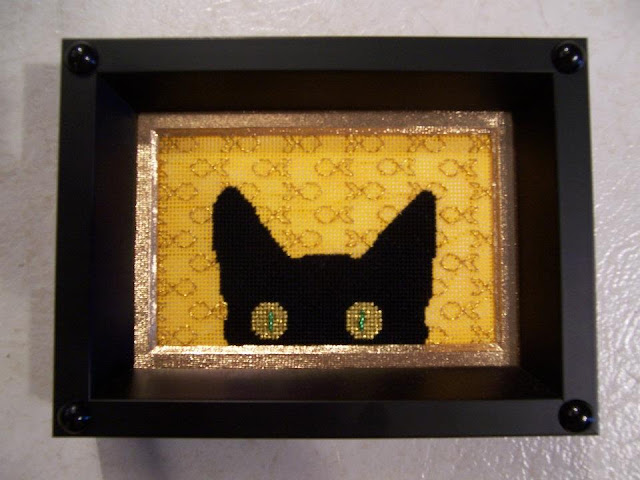 I was thrilled to see this one on my first visit to Aristeia Needlepoint in California.  What a fantastic bolster pillow!!

Here's a close up-- they stitched him in Fuzzy Stuff and added a jazzy dotted background: 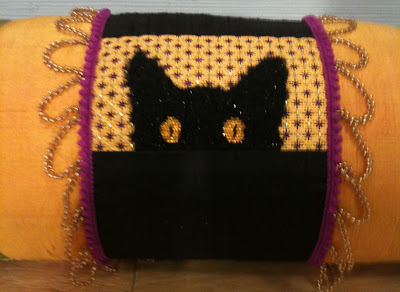 Last but not least, is this sweet and simple hard back ornament.  Finishing and photo from Rittenhouse Needlepoint. 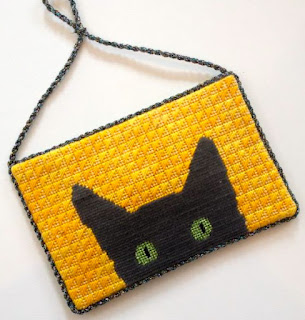 Hope you enjoyed this little gallery show.  And if you have your own version of Peeky to share, please do send a picture my way and I'll be happy to add it to the collection!  Happy Stitching!

The latest installment of the Garden Party Mystery Class finished up with the background, now our stitchers are waiting to see what Ruth will do with the center heart.  Ruth always builds anticipation by saving the best for last!

She stitched the flowers and added blingy sequin centers: 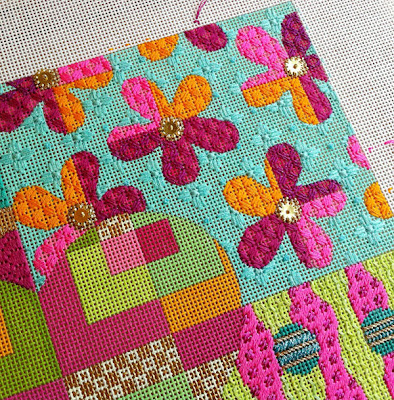 The timing couldn't have been more perfect-- the newest hot pink Silk Lame' color arrived just in time for the squiggly stripes: 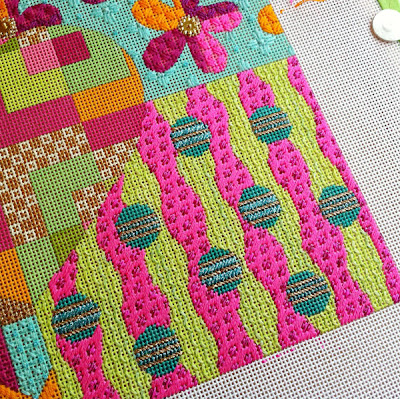 Next time, the heart! 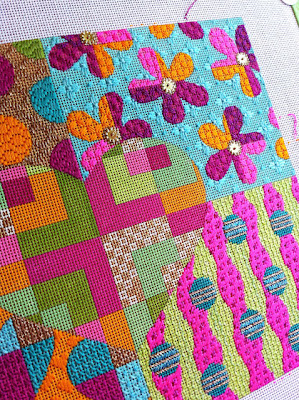 The progress so far: 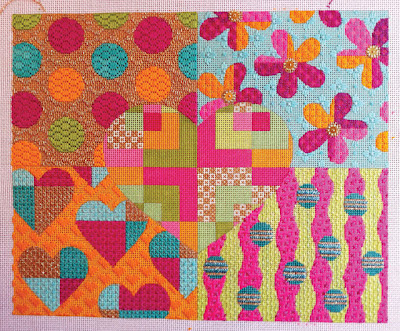 The finale will be here before we know it-- in the meantime, keep stitching!

I haven't been stitching a lot this summer so far, but I have enjoyed stitching by proxy by watching others stitch my designs!  Ruth Schmuff put together a stitch guide and kit for my Stars N Stripes canvas a little while back and my friend Judith Furie wasted no time in stitching it right up.  As always, Judy added a lot of her own personal touches, such as the vivid beadwork on the star, the sequins on the corner stars and my favorite, the red, white and blue corners.  Judy's stitching is the perfect example of when the stitcher actually enhances and improves upon the painted design.  Way to go Judy, I will look forward to seeing this again when it comes back from the finishers! 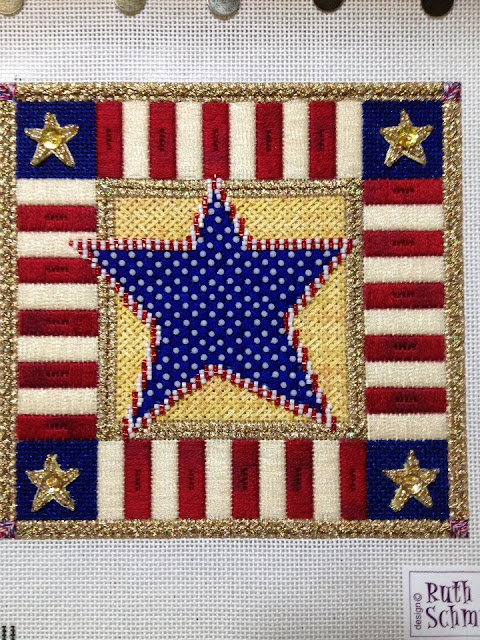 Another super-speedy stitcher, Karen Barras got very far out ahead of the Halloween rush by starting and finishing my Witch Hat House in less than two weeks!  I am just so thrilled with how this came out-- the stitches are just perfect, from the dimensional dots on the house to the flowing grass to the electrically purple zig-zag sky.  The cool embellishments are the perfect final touch, my fave is the pumpkin next to the door.  This one is a real winner Karen, I am also really looking forward to seeing this again finished! 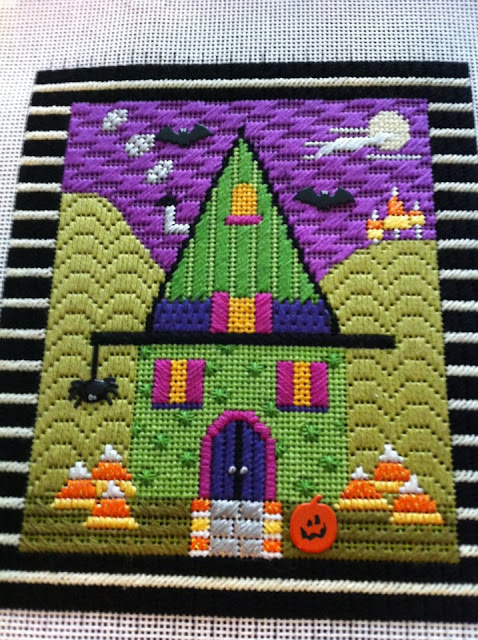 Last but certainly not least, Coni, the Spinster Stitcher Her Very Self, got off to an amazing start last week on my Orchid Maze counted canvas design.  She has a good chunk of the framework already in and probably will be done in no time!  Please take your time dear Coni, it's too much of a thrill for me to make an appearance on your blog to want you to rush through this!  I hope so much that you will enjoy stitching this as much as I have enjoyed reading your blog, but that would be impossible I think, as I have literally had to wipe tears of laughter away while reading your fantastic blog.  If there is still anyone out there who doesn't read the Spinster Stitcher, stop reading this right now, scroll down and click the link to it on the right-- you won't regret it! 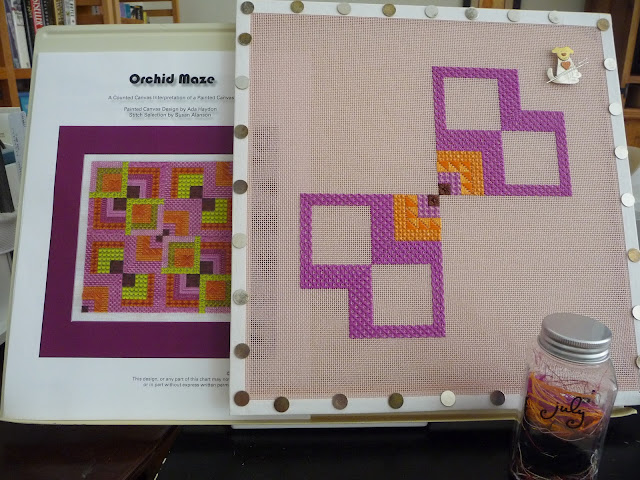 Hope you have found these to be as inspiring as I have!  Until next time, Happy Stitching!

Biscornus and Humbugs, Oh My!

Needlework accessories have been all the rage in cross stitch for quite a while now and they have finally began to make their way into needlepoint, specifically these oddly shaped pincushions called Biscornus.  The seemingly complex shape is deceptively simple-- it is really two ordinary squares that are sewn together with the corners in the centers, rather than corner to corner as usual.  After making a few of these in cross stitch I decided the design possibilities and the techniques were perfect for needlepoint.  As an added bonus, those who would like to try to self-finish a small project will find these pretty easy!

I made this Halloween-themed Biscornu for the Summer 2010 Columbus TNNA show.  It was my first effort to introduce these little goodies to the painted canvas enthusiast.  This one is a painted canvas on top and a coordinating fabric on the the bottom: 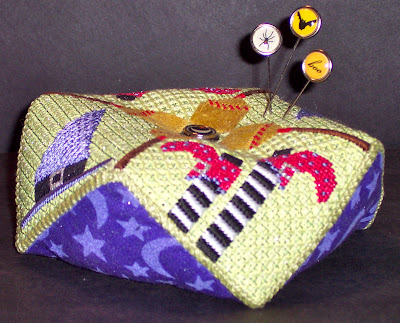 Here's the view from the top: 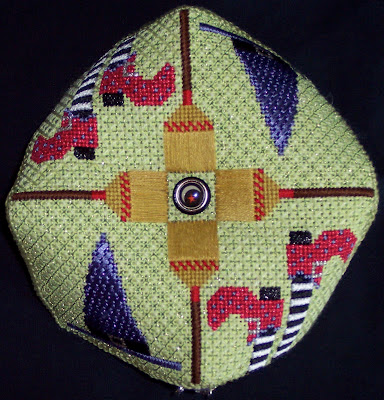 For last summer's TNNA show, I added a Humbug style cushion to the line, also in a Halloween theme.  A Humbug is also an odd-shaped pincushion that could also be weighted to become a frame weight to make it even more useful for needlepointers. (I like to use mine to hold my threaded needles.)  The Humbug shape is also deceptively simple-- it is a one-piece design in a rectangle shape.  The short edges are stitched together, making a tube, then the ends are stitched together, but each is folded in opposite directions, creating the oblong shape.

Here is the stitched but unconstructed Humbug: 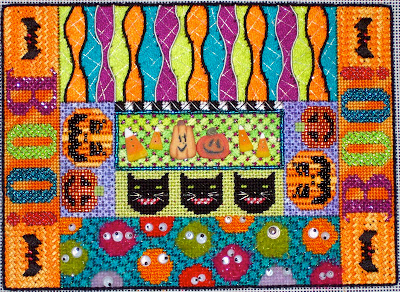 This is mid-construction-- I like to make a chain stitch border around the whole outer edge in perle cotton, then use a simple whip stitch to pull the edges together: 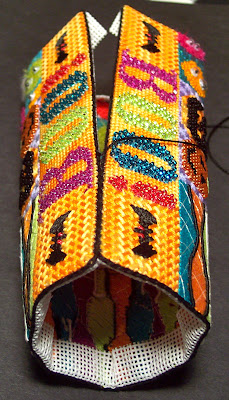 The completed Humbug, as seen from the side: 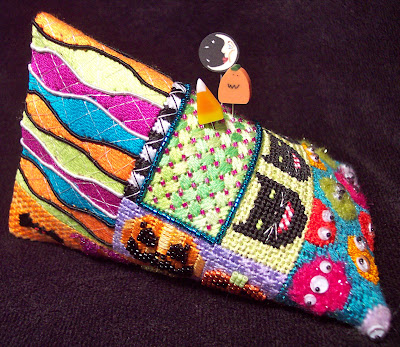 Here it the view from the back to the front: 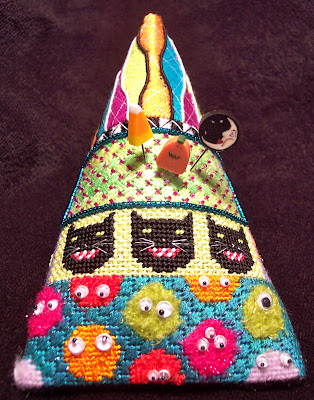 The same whip-stitch edging technique can be used to make a more traditional accessory, such as the scissor case I made to coordinate with my Humbug: 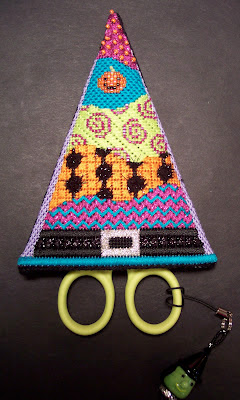 This is the back side, I worked Caesar Stitch in an overdyed thread over a smoke blue canvas to create this section: 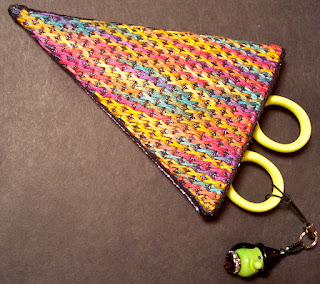 Hope you all will catch my enthusiasm for these fun little projects-- I know of several upcoming new Biscornu and Humbug designs that will be appearing over the next few months (including a new matched set by yours truly, to be released later this year!)

Until next time, Happy Stitching!

The Ruth Schmuff / EyeCandy Needleart road show is traveling far and wide this month, as far north as Ontario and as far south as Missouri.


Up north, we will be hosted by Cindy's Needle Art, Canada's largest needlework store!  They are also an online retailer as well, so be sure to click on the link to shop their catalog (as well as order any of our trunk show goodies you might need!) 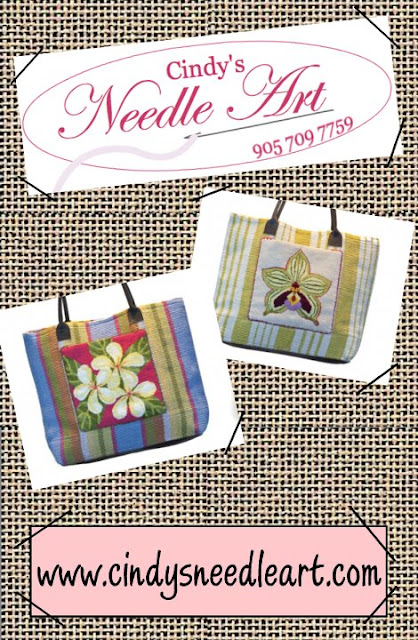 Down South, we will be at The Studio Knitting and Needlepoint in Kansas City, Missouri.  They too have a wonderful website and online catalog as well, so you can shop our show even if you are not local.

Both shows run from July 20th to August 6th.  Hope you might get to see one or both on your summer travels!

Here's what those attending Ruth Schmuff's Garden Party Mystery Class will be stitching this weekend-- well, some of them, anyway.  Some may still be waiting for a visit from their friendly UPS man!

The left hand side of the design had more work done in Lesson Two: 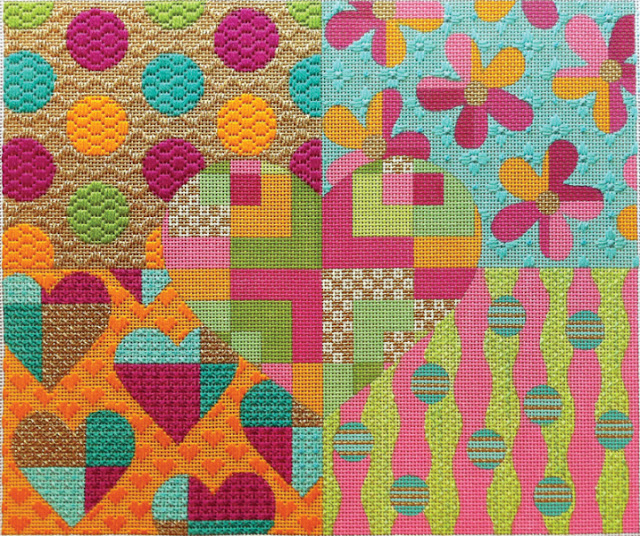 My favorite section (so far) had the dots filled in: 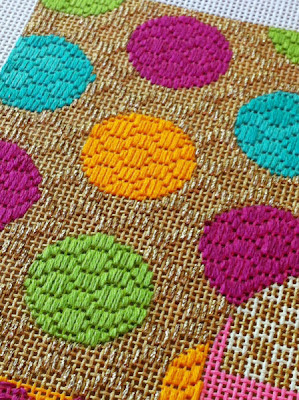 And the Hearts section got a lot more texture! 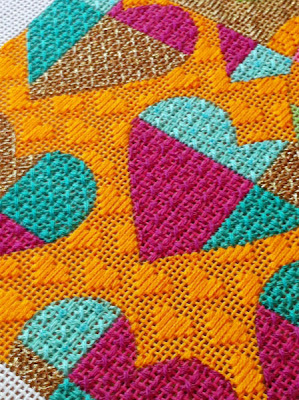 The in-class stitchers are probably finishing up Lesson Two right now while some of the correspondence stitchers are still keeping an eye out for UPS.  Hope their package gets dropped off today in time for the weekend, but if not I am sure they still have plenty of on-hand stitching to do!  Have a great July weekend all!

A Mermaid for Monday

Ruth Schmuff has been exceptionally busy lately-- she has new stitch guides for not one but two of my canvases.  The Pirate Mermaid is the latest and I am so eager to see the stitched model with all that bling.  And talk about happy coincidences, I didn't know about Swarovski's new neon fuchsia and orange pearls when I painted this mermaid's necklace, but what a perfect choice they are to create it!
(I'm pretty certain that mermaids would wear pearls!)

As you can see here, that's only some of the fun in the kit-- there are also baubles, boucle', leather, sequins, gold and silk: 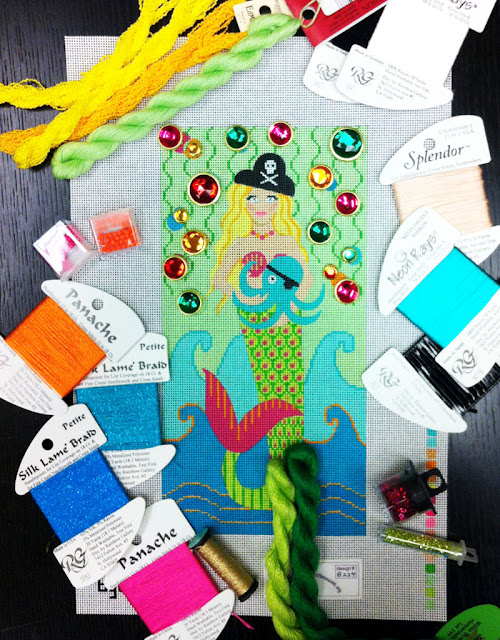 It was only a week or so ago that Ruth debuted the Stars N'Stripes stitch guide, but look how much progress my friend Judy F. has already made on it!  Talk about a fast stitcher, this is one of several projects that she worked on over the July 4th weekend.  She used Ruth's stitch guide plus added some of her own touches as well: 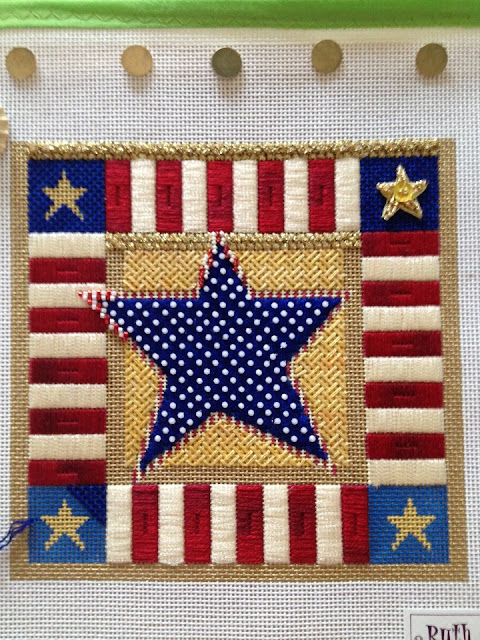 Can't wait to see the rest!  (Knowing Judy, we won't have to wait long!) Hope you all had a fantastic weekend with lots of stitching as well!

My Stitcherie friend Judy G. put it best-- Have a Hoot on the Fourth!  I hope that it will indeed be a hoot for all of you, with plenty of stitching time and a great big sparkly fireworks display!  Judy finished her Patriot Owl from my Hoot Hoot club just in time for the celebration.  I'm happy to note she used sequins for the eyes on this one also-- I used a different technique for the pupils on each of the six owls for variety but also, if one way turns out to be your favorite, by all means do them all that way!   (That's what Judy says she plans to do!) 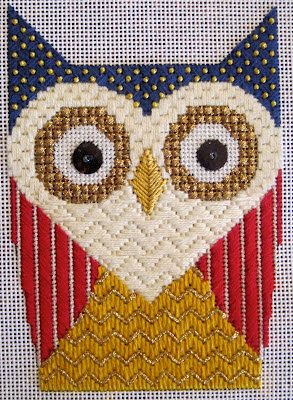 Ruth Schmuff has also been busy working on one of my Patriotic designs-- she has cooked up a stitch guide for it over at Bedecked & Bedazzled, read more about it over on her blog: 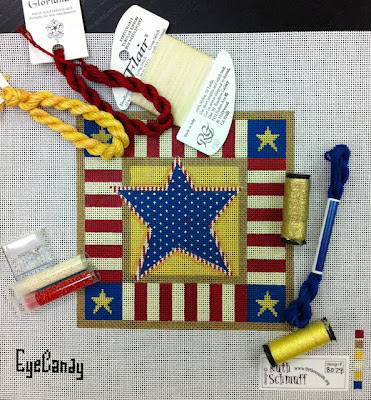 This is my Uncle Sam's Happy Fourth canvas and it was inspired by the fireworks display I am lucky enough to watch each year-- within walking distance from my house, a big red barn in the background and bunting decor everywhere, just wonderful and so Americana! (And I do bring a picnic basket too!) 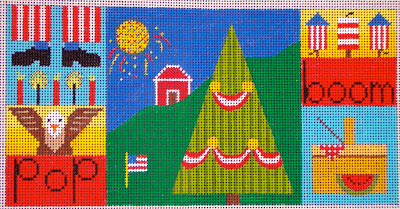 Wishing you all a very happy, safe, sparkly and stitchy Fourth!